I knew I wanted to make the Retro Striped Scarf as soon as I saw it.  It seemed very cozy.  I also like the fact that it was a scarf with a little more interest than your basic hdc scarf that was also manly enough for the average guy.

I decided to make this scarf for an above average guy, my father, more or less in Army colors. 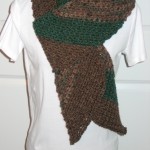 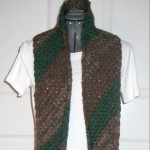 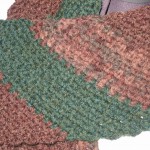 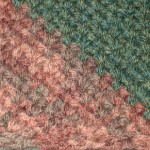 Modifications: Did not add the fringe, had to adjust rows to counteract curling on the increased edge (see below).

How it Went: I liked this scarf much more in theory than in practice. There were two things that kept me from liking it more.

First, it turns out that the three colorways I used had slightly different thicknesses which made it hard to keep the width constant. The fact that the scarf is on a bias helped disguise it, but it was a struggle.

Second, I kept finding that the increase edge kept curling in a way that meant I had to chain extra stitches to keep it from curling in on itself.

On the positive side, I really liked the Wood Print colorway.  (I also really liked the Forest Green Heather because of the way it incorporated turquoise with the dark green.) Also, I learned a new stitch (moss stitch) that looks nice and is very easy.

Bottom Line: I like how the scarf ultimately turned out, but I doubt I’ll make this particular pattern again.

One thought on “Army Scarf”